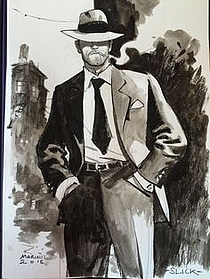 Tietoja kirjastostaniAs you can tell from my moniker, I collect books featuring gay sleuths. The first book with a gay sleuth I remember reading is Zubro’s A Simple Suburban Murder in 1989. I was just getting started on my coming out journey and read a review (in Time, I think) which made it sound so mainstream. I still have the book in my library.

During the next 15 years, thanks to Crossroads Market, our local gay bookstore (sadly, like many other local bookstores now out of business), I discovered mysteries by Hansen, Nava, Stevenson, Craft, Kellerman and Wilson. These sleuths, each in their own way, struggled with inner battles and everyday challenges. Some of their issues were directly related to being gay and others were common to our shared human nature. I saw my own struggles in these tough but vulnerable men.

Flash forward to around 2004. I began to seek out new gay mysteries. Of course, the web opened up new sources. By luck I stumbled across Slide’s seminal Gay and Lesbian Characters and Themes in Mystery Novels (McFarland & Co, 1993). Wow. Suddenly there were scores of mysteries that featured gay characters and plotlines. It was a whole world. I started to search for books on Slide’s list. I expanded my list with the help of Markowitz’s The Gay Detective Novel (McFarland & Co, 2004) and various author websites like Plakcy’s (www.mahumen.com).

And then Gunn released his authoritative, comprehensive and – for me – indispensible The Gay Male Sleuth in Print and Film (Scarecrow, 2005) now available in a new edition (Scarecrow 2012). Gunn is a mix of information, academic analysis and entertainment. He put my favorite characters into a social context that helped explain why I was so drawn to them. Because of Gunn I started to read mysteries as the characters’ personal narratives in addition to reading them as puzzles to solve or for fun escapism.

My Collection
It has been fun working with Gunn discovering new books. My collection mirrors his bibliography through 2011 with a few books from Slide thrown in. The works posted are limited to novels, short stories in anthologies (though one is in a magazine and few in chapbook format), plays, screenplays and teleplays in print form (currently, no ebooks, though the day is coming) available in English. Some of the works cross into other genres such as camp and humor, speculative fiction, horror, supernatural, historical, action/thrillers and espionage and many but not all include a murder mystery as a central plot point.

Search: These are books I am looking for. I appreciate any leads or sources you can pass my way. They are displayed here without covers and descriptions.

My Library: These are books I own. They are divided into 4 categories:
1. Gay Male Sleuth collection includes works that employ an out gay or bisexual man as the central or key sleuth. While genres may blur, the lead character does genuine sleuthing.(Adapted from Gunn.)
2. Other gay investigators of interest label is applied to works when the sleuth is sexually ambiguous or not out, his role is largely behind the scenes or seen only through the eyes of another or he is a gay friend and/or helper of straight or lesbian sleuths. Also included are sleuths whose detective work stretches the traditional boundaries of the mystery or crime genre, including action thrillers, or where very little actual sleuthing takes place. Some works are of interest to gay readers because of the setting, characters or storyline but there is no gay sleuth. The books I have are only a small portion of those that fit the category; see Gunn and Slide for a complete list, including nonsleuthing fictional policemen. (Adapted from Gunn.)
3. Of Interest to gay mystery readers. This group includes mysteries that involve gay characters or gay themes but not a gay male sleuth. It also includes crime novels and other genres other than mysteries.
4. Reference volumes were instrumental in helping me identify books to include in my collection and provide valuable and entertaining information.

My collection of Primary Gay Sleuths is comprehensive through 2011 - coinciding with publication of Gunn's last edition - except for books on my Search list. Starting in 2012 I have been on my own and I focus on authors I most enjoy reading and new authors who warrant the money to buy them and the time to read them– who are not as many as you might think with so many works self-published and unproofed and unedited and M/M romances (in most cases the authors seem to know very little about gay men) in which the mystery seems beside the point. So, I’d like to learn about any books you recommend.

As I say, my collection is based primarily on Gunn's bibliography with additions found in Slide. While Markowitz adds no distinct titles, she does add information, particularly about the authors. My Collection notes the books found in each bibliography. In the case of Gunn, only numbered entries are attributed though he makes passing references to other works found in My Collection. Except for books I have read and those published in 2012 and after I have relied on these 3 bibliographies - primarily Gunn - for the names of sleuths and plot summaries - they get all the credit.

All books are first edition unless otherwise noted. Covers are from the editions in my collection.