One day a conversation arose with my friends about cheese! When I mentioned cheese slices all my friends were rather perplexed. They had never heard of a cheese slice before. This baffled me! How could someone not know what a cheese slice is? It's probably my most frequently used kitchen utensil! Anyway, I decided to do a little survey and I found one person who had a cheese slice but he didn't ever use it.

You do mean a cheese slicer http://en.wikipedia.org/wiki/Cheese_slicer , I suppose. I do have one (I think all Dutch people do) but I never use it, I think it hollows out the cheese too much.

Ah yeah, I meant cheese slicer! Please excuse my poor English!! I use the type that looks like a carpenters plane! I see they are only really used in Northern Europe! I conducted my survey at a British univeristy, prehaps that's why no one had heard of them! Also the only place I could find one on sale in Britain was Ikea!!!

I have two of them, but only use them when I have guests or company. I'm not sure why.

Now, I had one similar to this one and loved it, but it broke and I never found another. Mine wasn't attached to a board.

I have 2. One looks like a rounded pie cutter, but has a slot at the fold, and the other has a wire stretched between two posts.

I use them if I remember, otherwise, just a knife.

I have three. One like clamairy posted above and these two:

I have one like that one on the red wrapping too, flee. I got mine at bargain store, though and the cheese seems to stick to it. I think it's probably best used on hard cheeses, and not on softer cheeses like Havarti.

I have one like the second in post 7. I LOVE it and don't like not having one around. I do think it is a Scandinavian thing, my parents got ours in Norway when we were over there. I've also seen them in the Swedish stores in Kansas.

Okay, you guys have inspired me to try that kind. I have one that came with some cheese platter a few years (10? 20?) ago, and another that my daughter bought me in Europe this past Summer. I'm getting them out NOW...

We always use cheese slicers, mostly like the top one in #7, and we are in America.

Maybe you are right, KarenElissa, that cheese slicers are most popular in Scandinavia. I live in Denmark so I'm going to survey my Danish friends now. I'm glad some people in other countries are using them too, I couldn't imagine not having one!

Okay, last night I used the Scandinavian style slicer on some Colby Jack, and it seemed to slice it too thin for my tastes. That is a soft cheese, anyway. I'll try it on something harder like Jarlsberg and see if it's better.

You'll find a wire in UK cheese shops for cutting hard cheeses, but for anything else a knife is used. 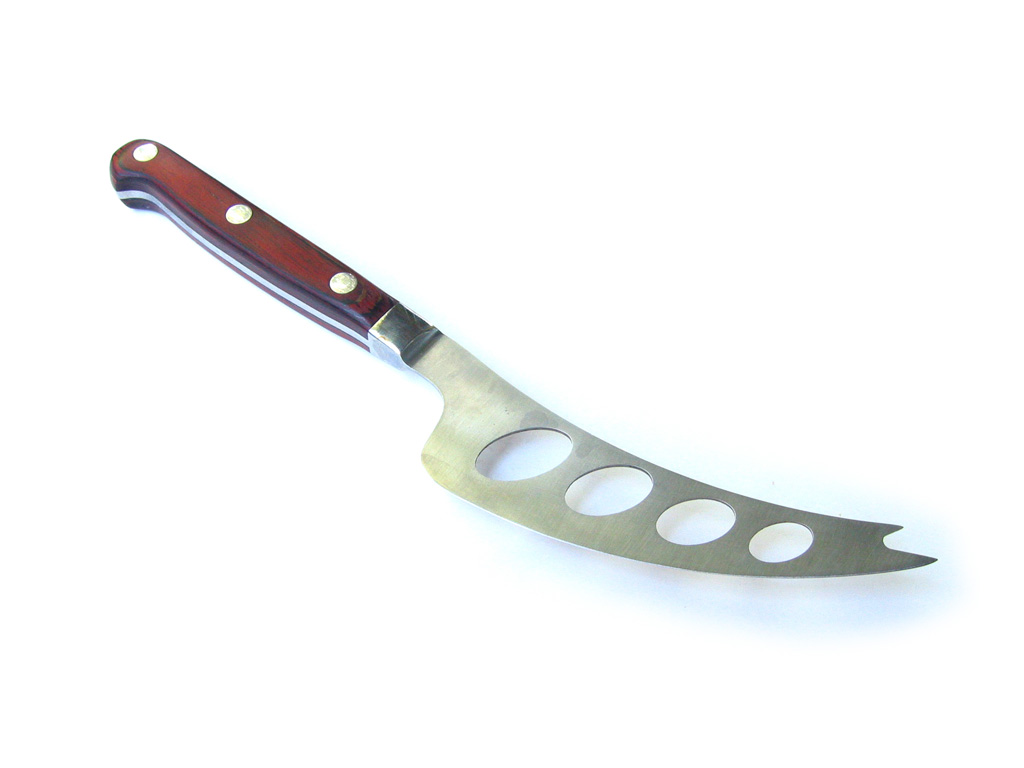 The holes in the blade stop the cheese sticking to it and the points allow one to delicately pick up the cut cheese without using fingers.

Or you can just use an ordinary knife.

I have a cheese slicer like the second one in post #7. We always had one when I lived at home, and when I moved out I made sure to get one of my own. When cutting cheese for use on biscuits (crackers) I use a cheese knife, but for something like cheese on toast, nothing works better than a cheese slicer - nice, thin, even, meltable slices.

I have one like Clam's in #5 and one like #7, but I never use either one unless I'm having a party and want to appear civilized. Usually we just hack away with a knife.

Thanks for getting me over here clam!

When at my own house, I hack with knife (or if it's a lovely ripe camambert, a spoon). However, if at my parents' house, I'll use their slicer, like the second one in fleela's post. It's also perfect for slicing cucumber!

Hiya, LadyN! Doesn't that slicer only work on dryer cheeses, though? Wouldn't something like Havarti be too soft for that? I'll have to experiment more with my slicers.

That's true, I wouldn't use it on anything soft, but it's great for cheddars, double gloucester, some stilton, etc. Not so great for wensleydale, as it just crumbles!

I have a slicer like Clam's in post #5. It's marble and it even came with an extra slicing wire taped to the bottom!

I would love on of those. Hmmm, maybe it's time for a gift to self...