Any plans for special cheeses this holiday season?

Every Christmas I buy a mature Stilton in a nice earthenware pot. I'm not sure if the pot improves the taste but I enjoy scooping it out instead of slicing off a chunk.

Got any pix, darrow?

I just saw a jack o'lantern carved out of a wheel of cheddar.

Is there such a thing as Thanksgiving cheese? Just a cheesey effort here to keep this group from dormancy.

I just bought a log of goat cheese covered in cranberries a few days ago! Does that sound Thanksgivingy? LOL

I would give thanks for any kind of cheese. I had to cut down drastically after a cholesterol check. :o(

>8 darrow:
Me too, darrow, me too. For kidney stone reasons.

I live eat vicariously through the Green Dragon now.

If you drink wine with the cheese it neutralizes the cholesterol. :-) I just had some smoked cheddar and brother was it good. Mmm mmm.

Cheesey plans for the holidays?

Cheese is so important that every week is the holidays! I'll get back later with recent treasures....

I have vague plans to feast on a variety of blue cheeses (Gorgonzola, Roquefort, Blue Stilton, Danish Blue, etc.) They're all lovely, but I'm curious how they compare directly.

See, the 12 cheese of christmas is just where all life started, I'm fairly certain. I mean, would anything say no to chocolate stout cheddar?! I think not!

When I was little, my parents had one of those little window calendars for december -- and the first year they did it -- it was *ALL* cheese. Every day, a new cheese in the calendar. The calendar had come with all of the cheeses shown, so it was awesome. Subsequent years there were little chocolates... but the cheese one... that one was heaven. 31 cheeses.... a new cheese every day of december. I have been feasting on aged cheddar, aged gouda and gruyere. But has anyone had Kunik? It is from Nettle Meadow Farm in upstate NY, a goat cheese, fairly widely available from specialty stores. I can't say enough about it. Luscious, wicked, addictive: irresistible!

Never heard of it - possibly not even available my side of the pond. Basic "philosophy" though: always try local / regional cheese wherever you go.

Aged Gouda?! - love it (but Gouda is in my region). I slightly prefer aged Leiden - it's much like Gouda, but with cumin seeds included. And then: the older the better. Preferably you shouldn't even be able to slice it anymore - it should simply crumble.

#17 - Oh, I Googled those images. Was feeling much too lazy to use my phone to take pics to post this morning.

Must try to find some Kunik.

The only place to buy cheese in my area is the grocery store. While they do bring in more varieties at this time of year, it is mostly limited to mass produced stuff. I do find some good cheeses, but rarely anything spectacular. There are some excellent cheese makers in the province, but their products aren't available locally. It's been a while since I've had any really nice goat cheese.

One thing that my grocery store just started carrying is a cheese snack called Grok. It is little disks of grana padano baked until crispy. It is delicious, and I have to strictly ration myself so I don't do anything foolish. I grok it.

#21 - Too bad you don't have Whole Foods nearby! And now I need to look for Grok!

I'm having a little get-together tomorrow. Just got back from the store with two fist-fulls of Delice De Bourgogne, a gooey cow's milk cheesy a bit on the obscene side. Along with a 4 year old Gouda and something I never tried before with a generic name (so that even the local BarkingMatt will not know what this is, I suspect): "Old Amsterdam", described as nutty and aged 18 months.

I'm excited to hear about aged Leiden. Never heard of it tasted it, but I'll be on the lookout!

I know "Old Amsterdam"; it's a Gouda type cheese and pretty good for a factory brand.

Oh! Wrong I was. Thanks BMatt. I imagine the guests will be happy with it --

Me again. So the Delice was a huge hit -- one couldn't go wrong there if you can find it! -- as was the aged Gouda. The Old Amsterdam: so-so. Not popular in comparison, and deservedly not. Not bad, reinterpreting BarkingMatt's "pretty good", but then don't place something truly good next to it. Very satisfying party overall, from a cheese point of view.

Maybe I'm used to even worse mass produced Gouda. Some of it is really quite awful :-(

Maybe so. But I think your assessment was on the mark.

I bought some Wensleydale with cranberries, similar to the one clamairy posted a picture of above, except with a cranberry coloured wax coating, and also something labelled "Spanish Goat Cheese". I've had the Wensleydale before and enjoyed it, but I have no idea what the Spanish goat cheese will be like. It only had the grocery store deli label on it, but it looks like a nice, firm, white cheese. I've rarely met a goat cheese I didn't like.

Oh, yes. I also got some chocolate cheese fudge. I mainly got it for the novelty, since I'm not that fond of regular fudge.

"Blessed are the cheese makers"

>33 SylviaC: It's a book, too: Blessed are the Cheesemakers.

I got cheese for Christmas! 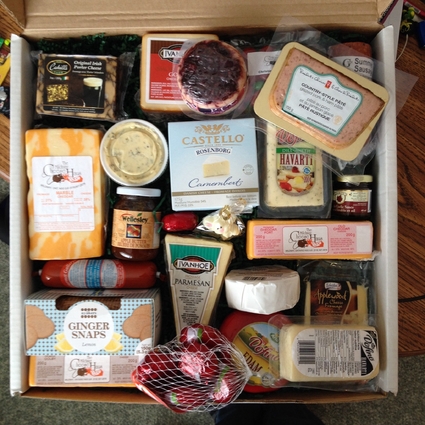 What a wonderful present. Enjoy:)

Oh, that's lovely!
I got a new cheese knife. I will post a piccie in the morning.

Yum! Aged Gouda for me..

stellarexplorer, you can have it. That's probably my least favourite in there. But I'm quite enjoying the Wensleydale with cranberries and the Irish porter cheese.

Thanks Sylvia! I'll message you my address! ;)

I love Gouda, but not aged cheese! (Yeah yeah I know, cheese freaks are usually all about the aged/moldy/stinky stuff, but not me! :P)

I love it all. 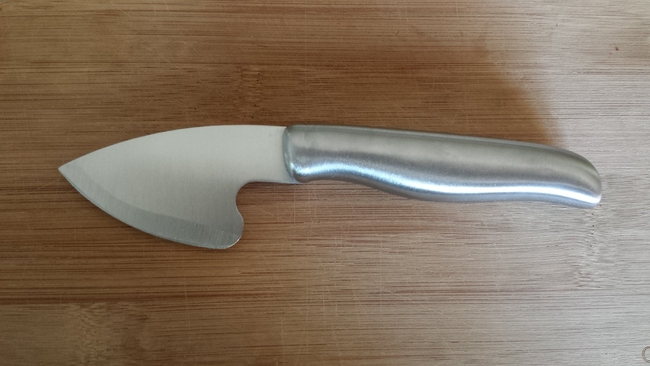 And aged cheddar is transplendant!

>41 clamairy: Maybe with one of those my Wensleydale wouldn't crumble into a tasty pile of rubble.

#43 - So far it's only been tested on Jarlsberg, Manchego and Havarti with dill. I don't think there is any way for Wensleydale to stay whole. (Especially if there's fruit in it.)