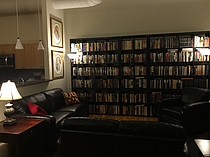 I love learning history in all forms - books, documentaries, museums, cemeteries, battlefields, and historic homes. My ancestors fought on both sides of the American Civil War, and that eventually became one of the main reasons I have such an interest in learning about the people and decisions involved in America's cataclysm.

Tietoja kirjastostaniI have my mother and grandfathers to thank for my love of history. Both grandfathers encouraged that from the age of five, one by bringing me to visit the battlefields of the Civil War and the other by giving up his books to start my collection. My great-grandmother started a library in her small hometown in North Carolina, and although I do not have any of her books, I certainly inherited her love of reading.

My library originated mainly out of the books my mother and I collected on the Civil War through the 1980s and 1990s. It began growing from my own acquisitions in 2000, when I became interested in general American History and rekindled my interest in the American Civil War. By college I had moved on to Slavery and Southern History books, as well as Military History, thanks to six great courses and two outstanding professors. I became interested in the American Revolution and Founding Fathers in 2008 after reading the works of Joseph Ellis and David McCullough. Starting in 2009, I added some of the fiction classics to round out the corners. In 2010-2011 I began a collection on the American Presidents. In 2012, I started a collection on Shakespeare and literary criticism on the classics. My library is spread over two states: my family's homes in North Carolina and mine in Connecticut.