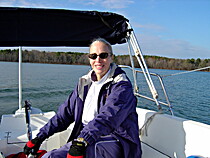 Tietoja minustaI'm a novice sailor and an accomplished reader.
My poetry collection, Wake Wake Wake, was published in September 2006 by Press 53. My work had earlier appeared in two chapbooks, How We Live and Slipping Out of Old Eve, as well as journals such as Poetry, New Letters, REDiViDER, and West Branch, and in numerous anthologies.
My first collection of short fiction, Fidelities, has stories set in rural areas from the Alleghenies to the North Carolina Piedmont. Most of the stories were earlier published in journals such as The Kenyon Review and Arts & Letters. Fidelities appeared in 2004 from Vandalia Books, an imprint of West Virginia University Press.
My novel Survivors takes readers into the hard lives and hard times of a West Virginia factory town in the early 1970s. My first novel, Neena Gathering, appeared in 1988 and was translated for the Brazilian market.
I was born in New York State, educated at West Virginia University and Queens University of Charlotte. I worked as a newspaper reporter and editor for more than a quarter-century before joining the faculty of North Carolina A&T State University as a writing teacher.