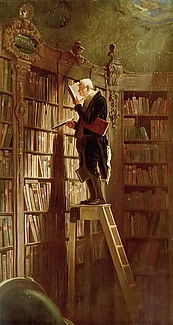 Tietoja kirjastostaniMy favorites are poetry, art, music, children's, history (esp. medieval), humor, travel, science, etc. I rarely buy fiction anymore, unless it is something I have already read and loved or maybe something I ran across at a used book store that looked interesting. (I still love the occasional wonderful fiction book, though, but the wonderful ones seem very widely spaced these days.) I'm often drawn to a book by the cover art. I make long to-read lists and then ignore them and read the next thing that crosses my path. My collecting is usually done in a similar manner. I find it almost impossible to read business and/or computer manuals, so I don't have any. (About 10 years ago I began to eliminate books, as they had taken over my life. I now have less than half the original number and I feel much lighter.)