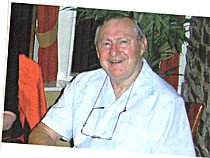 Tietoja minustaI am an old man now of 80 years and my story begins in 1928. One year later the Wall Street crash occurred and the consequence of that, the Great Depression, was felt all over the world - including Britain. I was born to a poor family in the poverty stricken backstreets and slums of the East London Docklands. Life for the working classes, in particular, was very tough in those years before the war and in my book A BOY FROM NOWHERE, Volume One, I give a graphic description of how it really was from the view of a 11 year old boy. War was declared in 1939 and it was decided to evacuate many thousands of kids like me as it was feared the docklands would be a prime target for the German Luftwaffe - they were not wrong about that ! But I was one of those kids and I shall never forget that chaotic day when the evacuation took place. Neither parent nor child knew where we were going; we simply accumulated as instructed with our gasmasks and small attache cases - or even just a bag if a suitcase could not be afforded - and I shall never understand until the day I die how they managed to sort out order from total chaos when tens of thousands of children crowded every main railway station in London - from there we were transported all over the place and the first our parents knew of us, and where we were, was when we wrote our first letter home. I returned to London in 1941 to find that the poor old city had taken a very heavy battering during The Blitz and in my street some 60% of houses were bombed and made uninhabitable - just derelict houses. We thought the bombing had ended - we were all wrong because it was just a lull and bombing continued up to 1944 when Hitler's V weapons then began to be used. But finally the war ended and London was one great happy city and every pub was filled to capacity with singing and dancing people. Meanwhile, I had 3 jobs as a schoolboy; firstly I peeled potatoes for the British Restaurant in the lower part of my school - here you could get a 2 course lunch for just one shilling and without surrendering food ration coupons, then I sold newspapers outside the docks,(for 3d per day) and then quite illegally I shone the spotlights on the pretty girls dancing at our local theatre and music hall every evening from 5.30 to 10 pm and for that I was paid 15 shillings per week (75p) - I was only 13. After the war I had to join the army and do my National Service and when I was discharged I took stock of myself. I had no educational qualifications whatsoever, no skills - what on earth was I to do ? But LadyLuck was with me all the way through and I eventually obtained a position with a City importer of confectionery. I worked hard, found I was good at selling as well as office organisation and eventually made progress. Later on I was contacted one day by the Commercial Representative at the Czechoslovak Embassy to ask me along for a chat and they told me they would like me to set up an office in The City to represent all the factories in Czechoslovakia that were interested to export to Britain. I accepted this challenge and developed the business successfully. This brought me into direct contact with the whole country as the factories were sited all over and I became very knowledgeable about communism. I made many friends and I saw how they suffered under this cruel regime. I had many adventures behind the Iron Curtain, mixed with spies, and was helpful to MI6 later on. However I resigned from my excellent position for I wanted to begin my own business importing confectionery products. This I started from nothing, with very little capital, and it became a success. Eventually I owned my own warehouse. But after some years I tire of the rat race and decide to retire early, build our dream villa in the sun, and my wife and I emigrated to Spain on the Costa Blanca where we spent 9 happy, wonderful, years. We returned to England to live in 1994 and here we are in Cheriton Bishop - a charming medium size village in the lovely county of Devon some 10 miles from the cathedral city of Exeter. The whole story of my life can be read in Volumes One & Two of my book A BOY FROM NOWHERE available from my publishers MELROSE BOOKS of Ely, Cambridge. Email: info@melrosebooks.co.uk or online from Amazon, Ebay, etc.