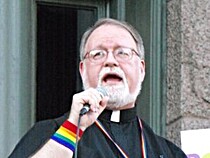 Tietoja minustaStephen V. Sprinkle is Director of Field Education and Supervised Ministry, and Associate Professor of Practical Theology at Brite Divinity School, Fort Worth, Texas, a post he has held since 1994. An ordained Baptist minister, he is the first open and out Gay scholar in the history of the Divinity School, and the first open and out LGBTQ person to be tenured there.

Sprinkle, M.Div. Yale University Divinity School, and Ph.D. Duke University Graduate School, is the author of two books and numerous articles on theology, church polity, LGBT and Queer studies. His current research focuses on the stories of LGBTQ hate crimes murder victims in the United States, and the formation and character of queer community. His most recent book, published in 2011 by Resource Publications, and imprint of Wipf and Stock Publishers, is entitled, Unfinished Lives: Reviving the Memories of LGBTQ Hate Crimes Victims. He is a member of the Association of Theological Field Education, the Academy of Religious Leadership, the Association of Welcoming and Affirming Baptists, is a trainer for the Welcoming Church Program of the National Gay and Lesbian Taskforce, and holds a seat on the national Board of Directors of the Alliance of Baptists. Sprinkle also serves on the Military Chaplains Forum of the Servicemembers’ Legal Defense Network. In 2008 he received the prestigious Catherine Saylor Hill Award for Excellence in Teaching, Scholarship, and Service by vote of his colleagues at Brite. He is the only Field Educator ever to receive the award. In 2009, Sprinkle was chosen as one of ten academics in the nation to participate in the Carpenter Foundation’s LGBTQ scholarly program, “Beyond Advocacy.” He received Brite’s Award for Creative Teaching and Scholarship in 2010, and was named “Hero of Hope” by Cathedral of Hope in Dallas, where he currently serves as the congregation’s first Theologian in Residence.

A widely sought speaker, panelist, and lecturer, Sprinkle has spoken and taught in 28 states as well as the United Kingdom and Canada. Most recently, he has presented The Unfinished Lives Project in Dallas, Arlington, Fort Worth, Austin and Houston, Texas, to the Polk County (Florida) PFLAG, to the GLBT Center at NC State University in Raleigh, NC, at the Grief and Loss Seminar in Wilmington, NC, at the annual meeting of the Forum on the Military Chaplaincy, to youth at the National Civil Rights Memorial in Montgomery, Alabama, and to Alabama Against Hate in Birmingham. He served as Hate Crimes Panelist at the 2008 and 201o Equality Texas State-of-the-State Conference at the Texas State Capital Building in Austin. A coalition of Texas human rights organizations called him to keynote the state “Hope-Not Hate” Conference commemorating the 10th anniversary of the deaths of Matthew Shepard and James Byrd, Jr. He is a regular contributor to the Human Rights Campaign’s Out in Scripture project, and a participant in the 2007 and 2009 Clergy Call Lobby Day efforts on Capitol Hill. Sprinkle and his life-partner, Rob Rodriguez, live in the Dallas / Fort Worth Metroplex with their English bulldog, Winston.