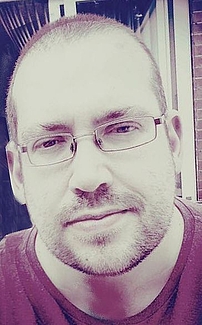 Tietoja minustaMichael Bray is a horror / thriller author of more than ten novels. Influenced from an early age by the suspense horror of authors such as Stephen King, Richard Laymon & Brian Lumley, along with TV shows like Tales From The Crypt & The Twilight Zone, he started to work on his own fiction, and spent many years developing his style. His first book was a collection of interconnected short stories titled Dark Corners (September 2012) which was picked up immediately by Dark Hall press and received great critical acclaim. This was followed shortly after in December by a novella titled MEAT, which like its predecessor, enjoyed a string of fantastic reviews.
It was the release of his very first full length novel, a supernatural horror titled Whisper in early 2013 that saw a sharp increase in sales and popularity. The book was noticed within the horror community for its blend of psychological horror and eerie supernatural elements, and was picked up after being initially self-published by Horrific Tales publishing. The book was re-edited and rereleased in July 2013, and immediately went to the top of the overall horror charts on amazon in both the UK and US, outselling such household names as Stephen King and James Herbert. The book was nominated for a Bram Stoker award and made it as far as the final ballot for the first novel category. Two sequels to the book were produced, titled Voices (May 2014) and Echoes (August 2015) which, like the original, went on to top the charts and generate huge buzz.
Between the release of the whisper novels, Michael also penned a six book deal with Severed Press. Three books have already been released and, like Whisper are consistently big sellers worldwide - From the Deep (November 2014), Return to the Deep (January 2015) & Spawn of the Deep (July 2015). In addition, the prolific author has also released two short story collections which, like the full length novels have proved to be incredibly popular with his readers. Funhouse (October 2013) and Forgotten Fears (June 2015) went on to sell well and receive a string of positive feedback from readers.
Michael has also worked on numerous collaborations, including several very successful extreme horror titles with bestselling author Matt Shaw, their complimentary styles quickly growing a rabid fan base of readers for the works they release together (ART – March 2014 MONSTER – March 2015 Home Video – July 2015)
With books sold in over forty countries and rights optioned for movie and television adaptations of his work, he recently signed with Media Bitch literary agency where he intends to take the next step in his writing career. He currently resides in Leeds, England, with his wife Vikki and daughter Abi.