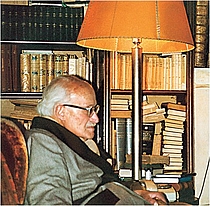 Tietoja minustaA couple of years ago when I was forced to sell off books from the house where I had spent my childhood, the antiques-dealer told me that he had never in his career carried away so many from a private home (only from libraries and publishers).

Even though I grew up with books and people who read a lot, I didn't do so myself until I was about 25 years old. Of course I went to school and university but I rather preferred to travel, to party or to do things like skiing, drinking or simply lying around without doing anything at all.
Then, (about ten years ago) I suddenly decided that I wanted to read and as the philosopher Dávila notes in one of his aphorisms: the last thing a cultured man will learn is to read.

I basically like to read literature and poetry in general but also enjoy the humanities, philosophy, art and its history, books on (mans) style, fashion, social conduct and manners, often get inspired for my own life by biographies of eccentrics and olde nobility; but also good fantasy like-whatever!- Miéville, Howard, Klarkashton, some of the beats, Bukowski, certain occult authors like Kenneth Grant or crazy British painter A.O.Spare, Russian literature, Chinese classics, Taoism, French decadents like Huysmans or Ducasse. My first language is German and I’m living in Austria. Apart form being fond of Italy and Japan, I’m also anglophile, I like British style, interior design, their penchant for biographies, birds and eccentricities, for tradition and bad weather, conservatism, history, anarchy, irony et cetera. There are surely many more topics that I do enjoy but I'll leave it at that for now. I'm looking forward to exchanging some book-recommendations and maybe discussing some of these subjects with you all!

N.B.: basically I am planning to use the 'tags' very loosely and idiosyncratically befitting my own life, quirks and predilections rather trying to create larger groups of books than to fragment them overly much. S/F is subsumed under fantasy, trash points to something that I really didn't like, mostly due to the extremely bad quality of the writing itself; luckily this doesn't happen very often cause I'm cautious in my acquisitions, art theory can be found under art history, myth encompasses a very wide field: from mythology to mytho-poiesis and maybe even ethnology at times. I am a poet and private researcher of the mysteries of life and death, a recluse who has hardly participated in society so please bear with me…

RyhmätAnglophiles, Books on Books, The Chapel of the Abyss