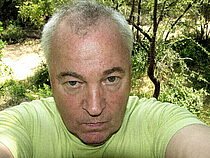 Tietoja minustaWho is Jon Quirk? I once did the odd (mostly very odd) book review, and this is how I was introduced to the readers …. I mean what normal, balanced, 2.2 kids and Acacia-avenue dweller would write the below -

That is a question he often asks himself! His birthplace is irrelevant, as he has lived in every corner of the globe, and has permanently itchy feet for new travel experiences, both within and without. His age, too, is of no concern because his daughter ensures he will be forever young. He maintains that his career does not define him either. Suffice enough to say that Jon Quirk is indeed defined by the sum of all his experiences, some which have caught him by surprise and many of which he has actively pursued.

Unfortunately, Jon does have a serious side. He is a Chartered Accountant (yawn) and specializes in Risk Management (yawn, yawn). He has worked for the big boys, and now seeks to be a big boy himself. Once advisor to the Nigerian Finance Minister on a range of financial, strategic and insurance matters, a seeker after challenges,a thorn in the side of the pompous and the corrupt. Weekends – which may occur at any time of the week - are either spent with the feet up, glass in one hand, book in another and the music of Bob Dylan growling on his sound system (those who call it a “hi-fi” get fired on the spot) or behind the wheel of his Jeep, trespassing on dirt roads in the insistent pursuit of uncharted African land.

Not only is Jon one the most opinionated people we know, but he also loves to voice those opinions. You will therefore see his name on the pages of publications such as the Business Day, Financial Mail, or Noseweek. His comments have been aired on BBC World and included in the New York Times and Spectator.

Once an accomplished sportsman (cricket, rugby and soccer) Jon has now retired to become what must be the most active “sofa-coach” in the country. Our rugby team is so much the worse off for not having him on their side! He also owns golf clubs. But never uses them. Used to ride and play polo; now just does the talk.

On his key ring he has engraved a line of his favourite poem, “Road to Ithaka” by Cavafy, because he feels it describes his life so succinctly: a winding journey of self-discovery and unexpected bends.

But if there is one constant in this life of his, it the Book. Jon owns thousands of books, and particularly prides himself on his First Editions Collections. In fact, his favourite pastime – apart from wining and dining – is to go onto the alibris.com website to see how much his books are worth today.

Tietoja kirjastostaniFirst editions, biographies modern classics old favourites; all have their place. Eclectic, very large - many thousands - and still growing at an alarming rate! ... So much to read and so little time!