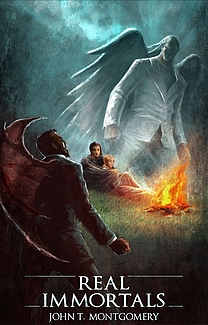 Tietoja minustaI'm a writer and member of the ACFW. I first started writing at age seventeen for my high school newspaper. My wife Nelly, has put up with me for 32-years. We live in Hidden Valley Lake just outside of Lawrenceburg, Indiana.

My wife told me a few years ago to start using my time more wisely. I was traveling for work quite a bit during that time and spent many weeks away from home in hotel rooms. I had the story line for Real Immortals rolling around in my head and it wouldn't go away. So I thought I would try to get it down on paper. A year and a half went by and the manuscript was finished. Then the fun began. I thought the writing part was the hardest. RIGHT! The book went through two copy edits, one complete re-write and several grammar edits before it was finally published on August 28, 2013. I only hope Immortal Vengeance goes quicker now that I have Learned a few things.

My family has been amazingly supportive. My son Trever was instrumental in the first book and now he is a co-author for the second.

My passion is to create a series of fantasy/fiction novels based on legendary biblical and fictitious characters and their direct intervention with the human race.

Tietoja kirjastostaniReal Immortals is a story about Stephen James & Leah Mitchell, two young lovers who have been raised by angelic beings since they were infants. Having been separated from their human parents shortly after birth each is adopted and raised by their immortal parents. Stephen’s origin is shrouded in mystery while Leah’s is a product of direct intervention after her parents are brutally murdered by a demonic half-breed.

Growing up in such close proximity to their incredibly powerful parents produces some inexplicable and astonishing results. At 8-years old, they start displaying gifts and abilities never before seen at such a young age. They are both inducted into paladin training and soon a new breed of healer & warrior are born.

Meanwhile, Legion, the most dangerous demon immortal on the planet plots to gain an advantage over his nemesis the Archangel Michael. After years of disappointment, he is now dangerously close to finding a weapon capable of defeating Michael in open combat. His goal…to defeat Michael, destroy Seraphim and change his destiny as a Fallen.