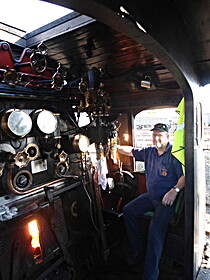 Tietoja minustaBorn in UK, I've spent most of my adult life living and working in Africa (Sudan, South Sudan, Kenya, Uganda and South Africa) in various sectors - education, church, justice and peace, human rights, reconciliation, nonviolence, humanitarian aid and development. I'm passionate about railways and I was a steam locomotive driver and fireman when I lived in South Africa. I'm also a volunteer on steam locomotives in Kenya, and I've just begun building an Africa-themed model railway in a forty foot shipping container at our new home at the top of the escarpment overlooking Africa's Great Rift Valley. I'm married and we live in Kenya where I claim to be semi-retired.

In 2020 I changed my username from "johnthefireman" to "John5918". Over the years a few people had assumed I was a firefighter. In fact I don't belong to that noble profession and the term refers to a steam locomotive fireman ("tallowpot" in US railroad jargon), stoking fires rather than extinguishing them. My new username is of course related to steam locomotives - 5918 is the number of a 250-ton East African Railways Beyer-Garratt named "Mount Gelai". This behemoth survived into preservation and I have been privileged to help maintain and operate her. By coincidence on a clear day I can see from my window the actual Mount Gelai after which the locomotive was named.

I think I've reached the point where I can describe myself as an author. I've published two non-fiction books related to Sudan, "The Voice of the Voiceless: The Role of the Church in the Sudanese Civil War 1983-2005" (2014) and "An Angry Shepherd: Sudanese Bishop Macram Max Gassis" (2021), both published by Paulines Publications Africa in Nairobi. Rather a niche market, and certainly not likely to become best-sellers. I've got two more biographies in the pipeline, both of East African church leaders who have contributed to peace in the region and are well known in their own milieux but not internationally.

Tietoja kirjastostaniMy non-fiction collection probably falls into three main categories: (1) railways, related to my hobby; (2) and (3) spirituality and Sudan/Africa, related to my work. My taste in fiction is eclectic, and I have not catalogued a lot of the "pulp fiction" paperbacks of the sort I pick up at airports to keep me occupied while travelling. For many years my books were divided between two continents, so the LT online catalogue was very useful for me.

A comment on someone else's profile page about how many books they had which are shared by no other prompted me to look at my own statistics. Apparently about 11% of my books are unique to me, shared by no other LT member. These are mostly obscure books about railways and Africa.