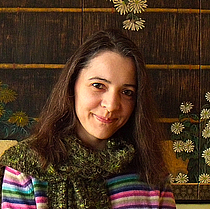 Tietoja minustaGina Collia-Suzuki was born on July 15th, 1969, in Birmingham, in the United Kingdom. Initially a student of Western art, she encountered Japanese woodblock prints for the first time in 1985, during a visit to Birmingham Museum & Art Gallery at the age of fifteen, and was immediately taken by their striking and bold designs, the compositional skills of their designers and the abilities of the craftsmen responsible for carving the blocks. In 1986, whilst studying for a foundation diploma in art and design, she met Jack Hillier, the world-renowned Ukiyo-e scholar, who became her mentor, and their friendship lasted until Hillier’s passing in 1995.
In 1988 Gina went on to Birmingham Institute of Art and Design to study for a degree in ceramics and glass. At the same time, under Jack Hillier’s guidance, she began in-depth research into the woodblock prints of Kitagawa Utamaro and their effect upon 18th century European artists. As her passion for prints increased, however, she moved further away from three dimensional design, eventually giving up working in clay and glass altogether and preferring to work in oils.
Gina began collecting woodblock prints whilst still a student, initially concentrating on book illustrations and then moving on to broadsheets, focusing particularly on those by Kitagawa Utamaro. Since then she has devoted herself to the study of Utamaro’s prints, eventually concentrating her research on the specific subjects portrayed in his illustrated books and broadsheets.
A few years ago, following a house move, Gina found herself living with nuisance neighbours. This experience inspired her to write her first work of fiction, 'The Wonderful Demise of Benjamin Arnold Guppy;' a satirical tale about a thrity-something housewife who is driven to murder her elderly neighbour.
Gina currently lives and works on the southwest coast of England, with her husband and a family of eight female rats.